Tag Archives: the life of an unknown man – book review

Book Diva Review: The Life of an Unknown Man 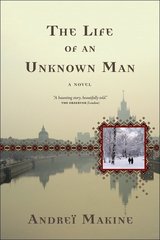 Although the novel, The Life of an Unknown Man, by Andrei Makine, is 208 pages long, its short length does not lessen the compelling story line.

The novel brings the reader an extremely well written descriptive of Russia, seen through two main characters. The first one is a man named Ivan Shutov, a Russian who has been living in Paris for about twenty years. He is a writer, aspiring to write that epic novel, a novel similar in style to Anton Chekhov and Leo Tolstoy. He lives and breathes the classic Russian authors, and compares his current life experiences to their writings. He is wrapped in dreams and fantasies, and the essence of life revolves around Russian Literature. He values their ideals that he reads within the pages of their books.

Shutov is approximately fifty-years old, and old enough to be the father of his former lover, Lea. After many discussions and arguments (some over Chekhov) he is brutal in his verbal attacks on her opinions. After a while, she became disgusted and fed up with him and his lack of emotional commitment. She left him for a man her own age, and Shutov has great difficulty dealing with her departure. He can not stop thinking about her, and obsesses on her. He feels a void, and decides to take a trip to St. Petersburg, Russia, to revisit his past, a past he has glorified in his memories, and one he has not viewed realistically.

When he arrives, he sees that things are not what they were in the past. Communism reared its ugly head with brutal force to the Russians. The country has gone through an upheaval, and it has collapsed. The citizens have become westernized in their thinking, and become materialistic in their approach to life. This attitude has a shattering affect on Shutov.

While there he meets up with a former lover named Yana. They had a fling while students, and she is not the same person he knew. How could she be after living through the changes and events her country has gone through. He encounters an elderly man named Georgy Lvovich Volsky, living in a room within Yana’s apartment complex. Yana and her son have told him that Volsky doesn’t speak, and is paralyzed. To make a long story short, Volsky does eventually speak to Shutov.

And, the tales he tells are incredible accounts of the love of his life, Mina, and of his experiences during Leningrad’s siege, and his military service to the country. The times were horrific, horrendous moments were prevalent, food was scarce, life was lived by barely hanging on. Volsky’s story is vividly depicted by Makine, and nothing is spared in his relaying it.

Throughout the pages, the reader can not help but grasp the devastation and the brutality of the times. One also gains a sense of the individual, as a separate being, one who has weathered all the forced events. The reader also gains insight into the philosophy of the individual as part of the whole in the connection of community, the military and the country. The title, The Life of an Unknown Man is very fitting, within these aspects. Makine is brilliant in displaying both modes within the pages.

He also makes the reader ponder the worth of a human. Volsky went through so much, yet he was not validated for his efforts. He went unrecognized in an environment that was not conducive to acknowledging accomplishments. The time periods that encapsulated his life achievements seemed almost for naught. Yet, Volsky did not view it that way. He saw beauty in nature, in music, in theater, and constantly saw the possible out of what others saw as impossible. Volsky saw his life in a positive manner, and saw his participation as his allegiance to Russia.

I applaud Andrei Makine for his brilliance and for his magnificent writing. The novel was a fascinating look at the history of what was then known as Leningrad (now St. Petersburg) and an intriguing read. He took me back to eras of harshness, and within the story line I found illuminations of hope resonating, strongly. I recommend The Life of an Unknown Man to everyone.