Aleksandar Hemon for his book, The Lazarus Project. It is a book I have on my stack of “to-read” books.

Rachel Kushner has been nominated for her book, Telex From Cuba.

Marilynne Robinson for her book, Home.

Salvatore Scibona for his book, The End.

If you want to see a listing of all of the nominees, in the four categories of fiction non-fiction, poetry and Young People’s Literature, visit the National Book Foundation’s website.

Dawn, by Elie Wiesel is an excellent book that examines many issues, especially on good and evil, forgiveness, spirituality and identity. 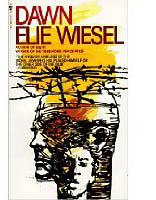 “There are not a thousand ways to be a killer; either a man is one or he isn’t. He who has killed one man alone, is a killer for life…the executioner’s mask will always follow him.” This was Elisha’s dawn, his dawning.
During the years after World War II, terrorists in Palestine try to drive the British out. This dark, intensely written novel, focuses on a young Holocaust Survivor, Elisha, who has joined a group of Jewish militants. He has been assigned to be the executioner of a British officer.

The book fluctuates between Elisha’s ghosts of the past, Holocaust ghosts, and his present situation, as Elisha continually questions whether what he is doing is right, is for the larger good . We enter his mindset, literally, and feel his struggles between what is the moral thing to do, and, what one does, in what they believe to be in the best interests of their nation, and their historical group of individuals. His dilemma “dawns” on him, as he becomes aware, and strongly perceives the struggle he has to face…within himself. Dawn, is a word that does not necessarily imply sunrise, and in this novel, although the execution is to take place at sunrise; the impact and emotions of the situation, are deeper, and more vivid, and illuminate, within, more than any morning sunrise ever could. Elisha has an awakening, and a new life begins, unfolds, for him…one he can never return from.

We see how the militant group dynamics can encourage and persuade a young person, in the wake of a horrific trauma of their own, to commit an act, that under different circumstances, they might not involve themselves in.

Weisel’s intensity in writing, and his analyzing the events for what they are…conflict…on both sides of the coin…leaves one to question what components make up the mind of a murderer, and whether there is justification for violence and murder, for a political cause, under certain climates.

Although the Dawn’s copyright is 1961, the mindset of the militant group could apply to the world events, today, with the current terrorist situations. In fact, if events of The Holocaust were not mentioned in the book, one could assume that it might have been written today, its relevance to current events is so strong.

© Copyright – All Rights Reserved – No permission is given or allowed to reuse my photography, book reviews, writings, or my poetry in any form/format without my expresss written consent/permission.