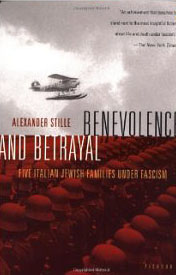 Benevolence and Betrayal: Five Italian Jewish Families Under Fascism, by Alexander Stille is intense, compelling and extraordinary in its details and depths.

The stories within this compelling book revolve around five Italian Jewish families preceding and during World War II, and their plight, idealism, their commonalities and their differences. Put together the stories read like an intriguing and profound historical novel, rather than five separate accountings of Italian Jewish families whose lives are affected in different, yet similar, ways.

Benevolence and betrayal, the title of the book, stems from the fact that the Italian Jews and fascism seemingly coexisted for almost two decades before the antisemitism and its roots dug deep into the skin and earth of the Italians, gripping like a vine, and causing some to betray Jews, and others to rush to help them.

Although the families come from different backgrounds, social classes, occupations and geographical areas of Italy, their stories are strong and vivid, and each one represents a part of the whole, in the Italian-Jewish structure.

From the accounts of the lives of a Jewish fascist family and an antifascist Jewish family, a Jewish family living in the ghettos of Rome and a family in Genoa, and finally to a family whose members were deported to Germany, the book is a revelation on the actual issues and almost unknown situations that happened to occur in Italy during World War II.

Alexander Stille’s book is more than compelling, it is a profound and historical accounting of events in Italy leading up to, and including, World War II, and it is eye-opening, heart-wrenching, mesmerizing and absorbing read. I was astounded by what I read, and realize how ignorant I had been about the Italian Jewish factor during World War II. I read Benevolence and Betrayal straight through in one day.