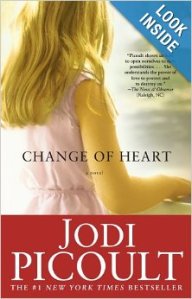 A Change of Heart, by Jodi Picoult is an excellent novel that examines several factors, from the death penalty to church and politics, and to the dynamics of organ donation. I Give it Five Stars!

Shay Bourne is awaiting execution on death row in New Hampshire, for the murder of policeman Kurt Nealon and his stepdaughter, Elizabeth. It will be the first execution in 69 years. Bourne feels it is the only way he can find redemption and salvation, within his personal spiritual belief. The problem is that death must be by hanging, and he has been sentenced to death by lethal injection.

It is not without reason that I find Picoult named the prisoner Shay Bourne. The given name Shay in Hebrew means supplanter and also gift, and the irish meaning is hawk and also can mean admirable, while the Gaelic meaning is gift. The surname Bourne means spring or stream, or one who lives near a spring or stream, or even border/boundary. It can also mean birth, beginning, rebirth. The variables of these names can apply to the traits and the endeavor of Shay Bourne to donate his heart to Claire, sister of the murdered Eliabeth, daughter of the policeman Bourne murdered.

The story is woven and alternates between Bourne, June Nealon..wife of Kurt, Michael…a priest who was on the jury that convicted Bourne, and he is now Bourne’s spiritual advisor, Lucious…a prisoner, Maggie…an ACLU representative, and Claire.

Jodi Picoulthas written a compelling novel, on many levels, including mother-daughter relationships, prisoner rights in relation to religious beliefs and the choice of dying, forgiveness and love.

Shay is viewed by some as the Messiah, due to some incidents in prison where others feel he performed miracles, such as reviving a dead bird, bringing wine into the prison water system, etc. The Gnostic Gospels come into play, as Bourne seems to be able to quote from them, with sayings supposedly made by Jesus. Bourne becomes a martyr of sorts for the death penalty.

The ending surprised me, lending clarity as to the reasoning behind Bourne’s decisions. I recommend A Change of Heart to everyone.