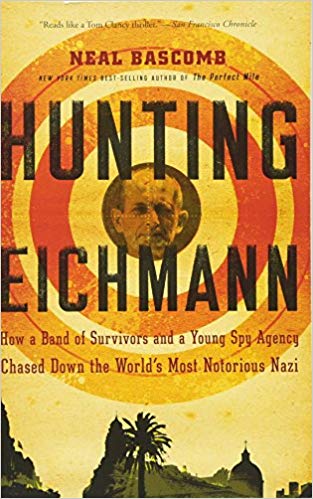 Hunting Eichmann: How a Band of Survivors and a Young Spy Agency Chased Down the World’s Most Notorious Nazi, by Neal Bascomb, is quite the intriguing thriller, and a non-fictional work that is brilliantly narrated.

In recounting the historical facts that led up to the capture of Eichmann, Bascomb left no detail or event untouched. His research is more than extremely thorough, and through documents, interviews, archives, etc., he has fashioned a narration that reads like a spy novel.

There were many who thought it would never happen, and understandably so. There were the skeptics, those who thought that the issues should just die out, but there were those who felt that there needed to be justice, and justice there was. Justice was done, and done in Israel.

I highly recommend this amazing and overwhelming book.

Hunting Eichmann: How a Band of Survivors and a Young Spy Agency Chased Down the World’s Most Notorious Nazi by Neal Bascomb, was made into a movie, directed by Chris Weitz. The title of the movie is Operation Finale.

This is my second reading of the book, for a book club.